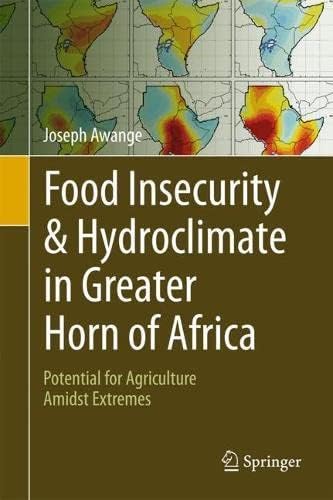 This book will benefit users in food security, agriculture, water management, and environmental sectors. It provides the first comprehensive analysis of Greater Horn of Africa (GHA)’s food insecurity and hydroclimate using the state-of-the-art Gravity Recovery and Climate Experiment (GRACE) and its Follow-on (GRACE-FO)’s, centennial precipitation, hydrological models’ and reanalysis’ products. It is here opined that GHA is endowed with freshwater (surface and groundwater) being home to the world's second largest freshwater body (Lake Victoria) and the greatest continental water towers (Ethiopian Highlands) that if properly tapped in a sustainable way, will support its irrigated agriculture as well as pastoralism. First, however, the obsolete Nile treaties that hamper the use of Lake Victoria (White Nile) and Ethiopian Highland (Blue Nile) have to be unlocked. Moreover, GHA is bedevilled by poor governance and the ``donor-assistance” syndrome; and in 2020-2021 faced the so-called ``triple threats’’ of desert locust infestation"span", climate variability/change"span" impacts"span" and COVID-19 pandemic."span" Besides, climate extremes influence its meagre waters leading to perennial food insecurity. Coupled with frequent regional and local conflicts, high population growth rate, low crop yield, invasion of migratory pests, contagious human and livestock diseases (such as HIV/AIDs, COVID-19 amp; Rift Valley fever) and poverty, life for more than 310 million of its inhabitants simply becomes unbearable. Alarming also is the fact that drought-like humanitarian crises are increasing in GHA despite recent progress in its monitoring and prediction efforts. Notwithstanding these efforts, there remain challenges stemming from uncertainty in its prediction, and the inflexibility and limited buffering capacity of the recurrent impacted systems. To achieve greater food security, therefore, in addition to boosting GHA's agricultural output, UN Office for the Coordination of Humanitarian Affairs suggest that its “inhabitants must create more diverse and stable means of livelihood to insulate themselves and their households from external shocks”. This is a task that they acknowledge will not be easy as the path ahead is “strewn with obstacles namely; natural hazards and armed conflicts”. Understanding GHA’s food insecurity and its hydroclimate as presented in this book is a good starting point towards managing the impacts of the natural hazards on the one hand while understanding the impacts associated with extreme climate on GHA's available water and assessing the potential of its surface and groundwater to support its irrigated agriculture and pastoralism would be the first step towards “coping with drought"span"” on the other hand.

"span"Professor Joseph Awange joined Spatial Sciences (School of Earth and Planetary Sciences, Curtin University, Australia) in 2006 under a Curtin Research Fellowship and concurrently undertook the prestigious Alexander von Humboldt (AvH) Fellowship at the Geodetic Institute (Karlsruhe Institute of Technology, Germany) having been awarded the Australian 2008–2011 Ludwig Leichhardt Memorial Fellowship for experienced researchers. In 2015, he won all the three major Fellowship Awards: Alexander von Humboldt (Germany), Japan Society of Promotion of Science (Japan), and Brazil Frontier of Science (Brazil) to carry out research in those countries. At Curtin University, he is currently Professor of Environmental Geoinformatics engaged in teaching and research having attracted more than $2.5M worth of research grants. He obtained his B.Sc. and M.Sc. degrees in Surveying from the University of Nairobi (Kenya) and was also awarded a merit scholarship by the German Academic Exchange Program (DAAD), which facilitated him obtaining a second M.Sc. degree and Ph.D. in Geodesy at Stuttgart University (Germany). In 2002–2004, he was awarded the prestigious Japan Society for Promotion of Science (JSPS) Fellowship to pursue postdoctoral research at Kyoto University (Japan).  He attained International Editorial Role in Springer Earth Science Books and has authored more than 20 scholarly books with the prestigious Springer International Publishers and more than 200 peer-reviewed high-impact journal publications (e.g., Remote Sensing of Environment, Journal of Climate, Climatic Change, Advances in Water Resources, International Journal of Climatology, and Journal of Hydrology among others). His main research areas that have attracted media coverage (e.g., Environmental Monitor) are in the fields of (i) environmental geoinformatics: satellite environmental sensing (e.g., changes in global and regional stored water (surface, underground, ice, and soil moisture) using GRACE/GRACE-FO and TRMM satellites; climate change using GNSS and altimetry satellites), which is employed to face the emerging challenges of the twenty-first century posed by increased extreme hydroclimatic conditions, e.g., severity and frequency of droughts in Australia and Greater Horn of Africa (GHA), and the changing monsoon characteristics in Asia and Africa leading to floods, and (ii) mathematical geosciences: hybrid-symbolic solutions that delivers hybrid symbolic-numeric computations (HSNC), which is a large and growing area at the boundary of mathematics and computer science and currently an active area of research.